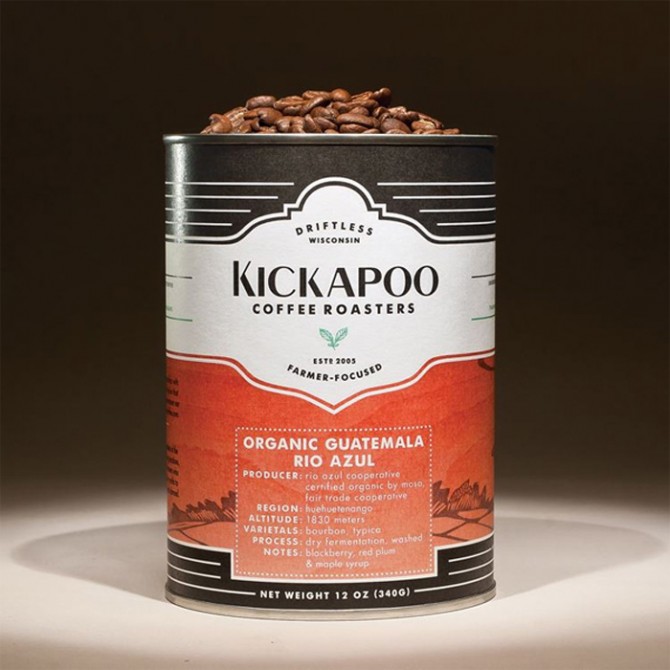 A Tale of Two Guys & Kickapoo

Kickapoo Coffee owners T.J. Semanchin and Caleb Nicholes both found the relatively small town of Viroqua, Wisc., on their own, for different reasons. Then, coffee brought them together.

More on that story later. First, let’s get to the beans. 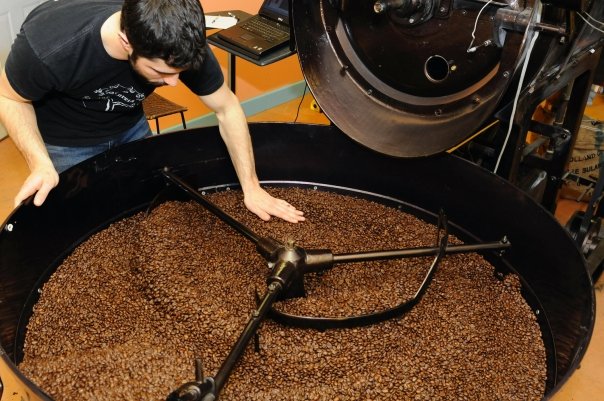 When it comes to roasting strategy, Kickapoo has had a clear direction since the beginning. “”While we always leave room to experiment, we very much value a consistent product, so there’s got to be a balance,” says Nicholes.

That balance was especially hard to keep intact when the new and current roaster arrived in 2007. “We moved to a super-customizable, 30-kilo Probat, then added a bunch of technology,” continues Nicholes. “We went from [a roaster] with a few variables to one with, basically, an infinite amount of variables.

“I’m also a perfectionist and try to coax as much out of the coffee as I can during the roasting process, so it was a little painful that first few years getting to know the machine and how it works. In general, the intention is always to be doing the best job that we can. It’s hope, heartbreak, tears–and pouring everything we have into it,” says Nicholes, noting that after five years of working intimately together, he and the Probat are now old friends.

“You have to invest in technology but also understand the processes better,” he continues. “Taste changes, coffee aesthetics change, and we have changed in our crafting of the coffee and will continue to change, no doubt, but we pride ourself in being really honest with what’s going on in the cup.”

Keeping up on fellow roasters is also important, he says, which we obviously subscribe to here via this very guest roaster program (we hope you’re enjoying our cavalcade of luscious beans, usually located on the little shelf to your left when you’re making a purchase within Wyrm environs).

“For me, tasting any coffee, particularly from roasters I don’t know really well, it’s always an adventure. It’s good to know what’s out there, what you’re up against, and to keep your finger on the range of aesthetic that folks are going for consciously or slipping into unconsciously, depending on how much control they’re putting into their sourcing and roasting,” says Nicholes. “For us, it’s seeing how we stack up, but it’s also seeing what aesthetics roasters are going for, which ones we like. We might be like, ‘That coffee is roasted better than ours. What are they doing? How can we improve?’ Because it’s possible…sometimes if you get into a rut of this is how we do things, you don’t see the possibility for improvement.”

One recent improvement of note that you can see on display at Wormhole this month are the new recyclable, sealed Kickapoo Coffees tin cans. Yes, we are a bit jealous.

At that point in our conversation, Nicholes headed out and Semanchin smoothly took over talking about sourcing as abruptly as his business partner moved on from talking about roasting.

“The backbone of our coffee sourcing is that we are part of a roaster’s cooperative,” says Semanchin. “We co-own our own importing company, pulling in coffee from a dozen countries. It’s all about the volume of our purchasing, but for our micro-lots, we’re direct-sourcing all our Ethiopian and Kenyan coffees this year and work with some importers, too.

“[We have a] varied sourcing program, finding the routes and avenues that bring us closest to the farmers,” he continues, noting a very positive experience with Cooperative Coffees, which works exclusively with fair trade co-ops. “We definitely have a very unique sourcing model that we’re all about tweaking and improving.

“There are often conflicting goals, the social justice piece of working with small farmers exporting their own product versus trying to source the highest quality coffee in the world,” says Semanchin. “It’s a great challenge, trying to meld those two issues, but we’ve really embraced that as part of our mission at Kickapoo…it’s, ‘How do we keep raising that bar higher and higher?’”

Where are they now? “Ninety-percent of our coffee is direct-sourced, though we try not to get into the labels, just do it how we know, the most ethical way,” he says. “We’re working on achieving the highest goals in direct and fair trade worlds. For a small company, or even a large one, sourcing coffee this way is an immense task.

“We’ve been blessed with this foundation as we started Kickapoo, had a lot of relationships already established,” he says. “As far as advice to other small, young roasters, maybe that model of the cooperative, a legal company we co-own, is something. We’ve been able to tap into that, and it was a big focus of mine previous to here–the traveling and sourcing of coffee and evolving those relationships. We’re buying from grower groups that I’ve worked with for 10 years and I think they’re rolling out coffees that we consider to be benchmark coffees for their origins.”

The Story of T.J. 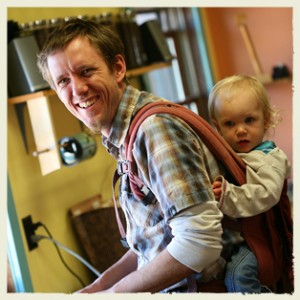 For his part, Semanchin was more about the farmers than the beans from the beginning. We like that. “I spent some time in the coffee lands of Central America, studying a sustainable development program in Costa Rica,” he recalls. “The center itself was actually located right in the heart of coffee country, coffee co-ops just down the street. We looked at coffee as a case study to see how a culture deals with [exporting a commodity that’s produced by a number of smaller agricultural operations]. The other main export was bananas, a different commodity consolidated in large corporations where very few economic benefits trickle down to the local communities and there are huge environmental consequences.

“I got to view the effect of small farms and co-ops and the potential ecological benefits of traditional, shade-grown coffee farms–but first got into it through that lens of studying the social and environmental effects,” says Semanchin, admitting coffee quality wasn’t his focus point yet. “I came back to the States, landed in Minneapolis, and through some of my connections from Central America, landed a job at Peace Coffee in Minneapolis.

“It’s grown to be a pretty big brand in Twin Cities. When I started, there were just two of us, so I was in at ground level of a coffee company focused on sourcing fair trade organic coffees. As the company grew, my responsibilities morphed into the roasting and sourcing of the green beans and that’s when my passion for cupping and getting into the roasting side continued to grow. Something drew me toward coffee and then once I got into it at the flavor-in-the-cup-level,” he was hooked.

“After my time in the Twin Cities was up, the wife and I were ready to take a plunge and get out of the city, move to a more rural setting up in Viroqua, Wisc.,” says Semanchin. “It’s a great little town to set up shop: good people, tons of organic food, schooling options (his son just started kindergarten).” He and his wife now have two children and are well-rooted in the community, life and work has come together. “I was ready to be my own boss and do my own thing and move to a small town–where creating your own job is often one of the only employment options.”

When the Semanchins moved to Viroqua, Kickapoo Coffee was already up and running, and this is where we back up into the story of Caleb Nicholes. “Kickapoo was up and running before we moved to town,” says Semanchin. “Caleb had the idea before us. My wife and I decided to start up a coffee company and, as we were brainstorming, we got news that someone had beaten us to the punch and started a coffee roasting company in town, a town of 4,000 people, so two roasters not likely.

“At first, it was a bummer, but then we decided to come and introduce ourselves to Caleb, who was open to chatting,” and, with that, going back to our interview, Caleb chimed right in, picking up where his business partner left off.

The Story of Caleb 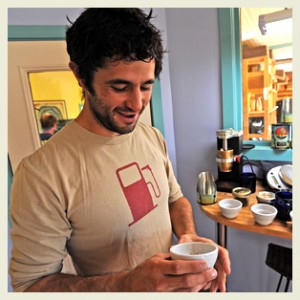 “My passage into coffee was a little different. Right around 2000, I graduated college and had been working cafes and got a taste for cafe culture,” he says. “I was always interested in cooking and food, working at restaurants. I started home coffee roasting around 2000, working at restaurants and cafes, thinking about owning one. In the meantime, I also fell in love with wine–the world of wine, the study of wine. I worked in high-end restaurants for a number of years. Studying coffee was part of my hobby, but on the back burner after I got really into wine.

“The restaurant I was working for in Madison went out of business so I took job with a boutique wine importer and pursued wine very seriously for three years and ultimately decided to move to a small town and jump ship from the wine business,” he continues. “I was focused on my son. His mother grew up here in Viroqua; we split up and I decided to move here and kick my own thing off.

“Coffee made the most sense at the time. I didn’t know jack about commercial coffee roasting, and far as operating a coffee roasting company, I was pretty green. I started the company in November, 2005, and T.J. came in four months later,” says Semanchin. “Finances were thin and my business acumen was very thin. T.J. brought essential resources and experience in building a coffee company, which allowed me to concentrate on flavor development and sourcing.

“I really wanted to get very close to producer partners and also had a real passion for high quality and understanding the science behind roasting. T.J. and I came together on both of those in a really synergistic way. It’s important for both of us to do everything well.”

Now pay attention because Nicholes is about to reveal the ‘Rosebud’ of Kickapoo Coffee Company: “I was obsessed with candy as a kid and T.J. liked to play Monopoly by himself.”

That’s how it began. Seven years later, Kickapoo Coffee is running on all cylinders, says Nicholes. “Caleb and I both moved here to get out of the city, looking for a certain lifestyle. We didn’t have huge expectations. We weren’t focused on growth or having a medium-sized company, which is what we’re turning into…nine of us here.

“We had some early successes and a very clear vision from the get-go, which helped us become relatively successful early with some impressive growth and we had to re-consider where we wanted to head with this,” Nichols says, summing it up. “As we saw we had more resources and could bring new people on the team, we were blessed with awesome folks who kept bringing new energy to us. We were a little surprised when it got to the size we thought would take 5-7 years in only three years.”

There’s also the real-life impact on Viroqua, which draws at least somewhat of a comparison between the positive effects of responsibly produced coffee in origin countries. “We’re employing people here in our small town where there’s not a lot of job opportunities, we’ve become a resource economically,” says Nicholes. “That wasn’t the goal at the outset but we’ve realized we can be a company of ten people and do it well.”

And while maintaining sanity: Kickapoo has stuck to a four-day work week across the board. “Fridays are a family day for us, we’ve held true to that, and I think that speaks to us having a clear vision when we started and haven’t veered from that, just gone deeper as we’ve been able to grow and gain experience.”

An open heart, clear vision, dedication to farmers and family…these are the things on which Kickapoo Coffee is built and it comes through in the beans–which you can currently get at Wormhole Coffee here in Chicago in very cool, reusable tin cans. 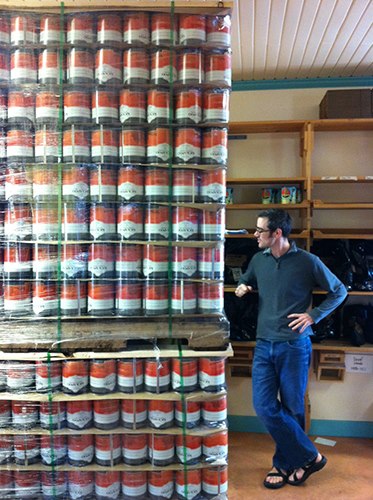